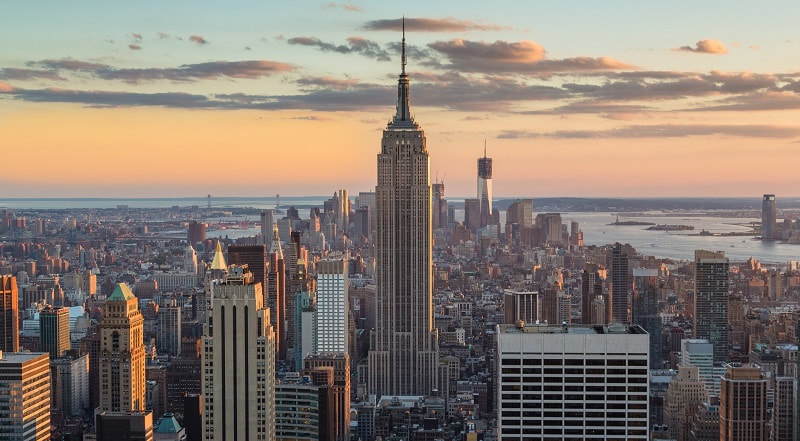 On the 102nd floor, the Empire State Building’s Top Deck offers up the best views of the city. You can see Central Park in all its glory, see the street grid which clarifies the city’s ingenious design, and if you visit on a clear day you might even be able to see well beyond the skyscrapers and up to 80 miles in the distance. Not only that but if you visit the Top Deck observatory you will also get to ride the manually operated Otis elevator. The elevator shows your altitude rise as you go further up, instead of counting floors. Take tons of pictures on your way up for a truly memorable experience.

There’s also the observation deck on the 86th floor that provides 360-degree views as well.

However, the Empire State Building is more than just a great place to check out the view of New York City. It also provides an educational and immersive experience. In the lobby on the first floor is a newly renovated interior with new art deco ceiling murals, a historical Dare to Dream exhibit, and a Sustainability exhibit. The building gets tech savvy with a new app free to download that highlights all there is to know about this iconic building.

About The Building
The Empire State Building stands just 102 stories and has a roof height of 1,250 feet and with the antenna, it stands some 1,454 feet tall. The name of the building comes from New York’s nickname as the Empire State. It is the fifth-tallest skyscraper in the United States and is the 28th tallest in the world. However, it is the 6th tallest freestanding structure in either North or South America.

The building was completed in 1931 and was designed by Shreve, Lamp & Harmon. It is located on the west side of Fifth Avenue between West 34th and 33rd Streets. During the late 1820s, the location was owned by the Astor family, and John Jack Astor’s descendants eventually built the Waldorf Astoria Hotel there in the 1890s. They eventually sold the hotel in 1920, and the property ended up under the ownership of Empire State Inc., which included the partnership of former New York Governor Al Smith and John J. Raskob. After fifteen revisions of the Empire State design, they decided on a design that would make the building taller than both the Chrysler building and 40 Wall Street, which were being built simultaneously.